The store will not work correctly in the case when cookies are disabled.

Things You Must Know Before Buying a Duvet Cover

Things You Must Know Before Buying a Duvet Cover

Winter is around the corner and you will need a duvet more than ever. The cozy feel of sleeping with a warm duvet on a cold night is unmatched. With this feeling comes the hassle of washing your duvet full of down and down alternatives. Getting a duvet cover for your duvet will save you the trouble of washing it frequently. Plus, you get to mix & match colorful and stylish covers to elevate your bedroom décor. This is why we have curated a shopping guide for you to help purchase the best duvet covers in the market. Well, before we move ahead with the things you should be looking for while buying a duvet cover, we will clear up some frequently asked questions.

What is a duvet?

Duvet is a bag stuffed with fillings like down, cotton, wool, feathers, silk, and synthetic materials. These fillings are soft, light and insulating to keep you warm and snug when the temperature dips. After the fillings are inserted in the bag, it is then sewn meticulously to ensure even distribution of the stuffing to keep it comfortable and fluffy. Mostly the outer layer or the shell of your duvet is made of cotton because of its temperature balancing properties. The duvet originated in Europe; in old French the word duvet means down.

Duvet vs Comforter What’s the difference?

The comforter serves a similar purpose to that of a duvet, but is less fluffy. It is not as warm as a duvet and needs extra blanket. Comforters are available in different styles and colors, whereas duvets are plain and simple. You can play around with different colors and styles with duvets as it needs an easy-to-change cover. Comforter comes in a set of bedding with matching pillow cases and shams. Washing and drying a comforter can be expensive, while your duvet needs a cover that can be washed at home. 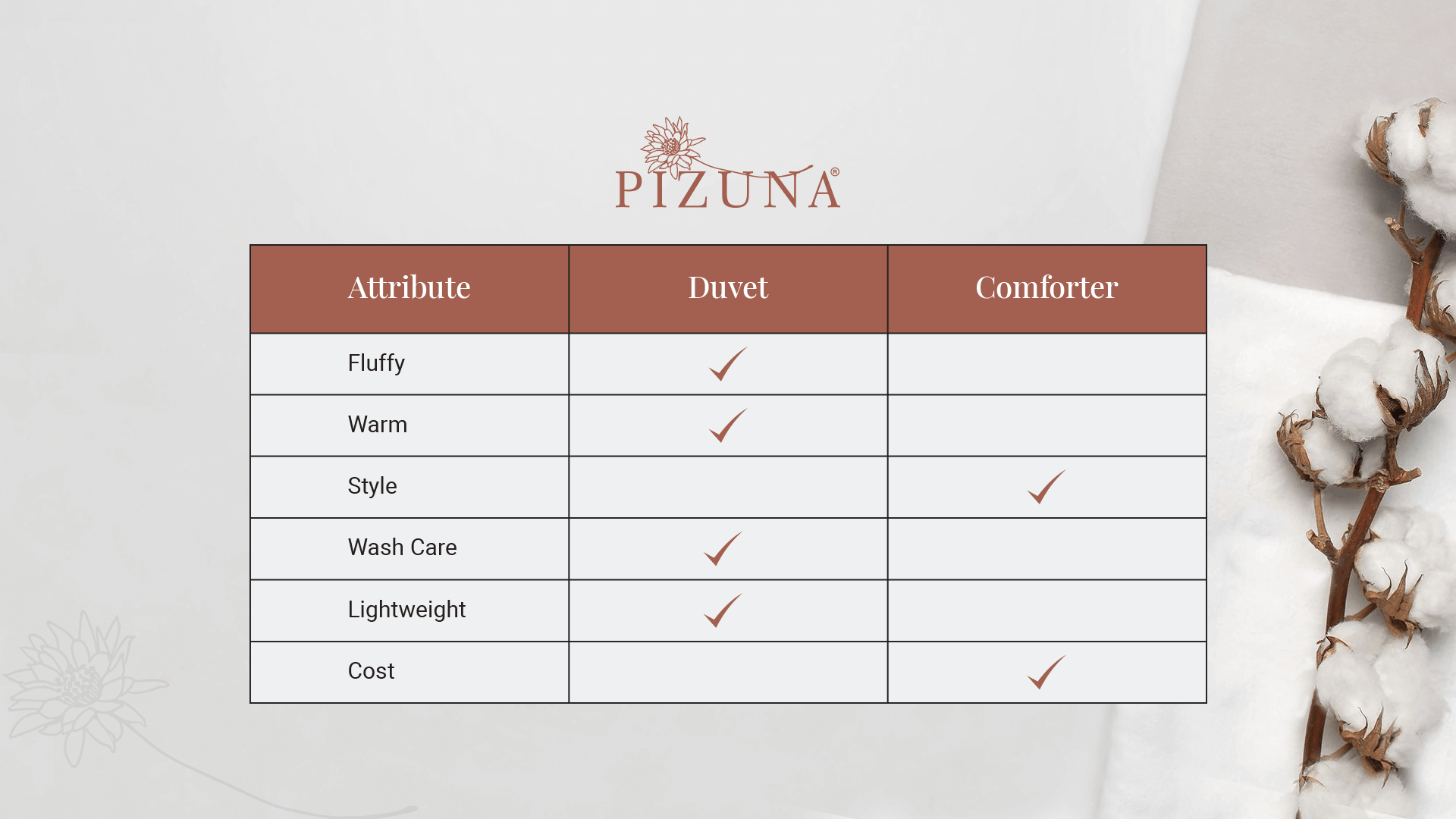 The difference between duvet and comforter is based on the characteristics mentioned in the above image. You should know what a duvet cover is used for. As the name suggests duvet cover protects your duvet from stains, marks, spills and dirt. Similar to how you cover your pillow with a pillow cover, pillow sham or pillowcase. A duvet cover is interchangeable, easy-to-wash, lightweight and comes in several patterns and colors. Washing a duvet is not feasible, you always have to keep it covered, follow this check list to pick the perfect duvet cover for your bedroom.

What is the best size duvet cover?

Your duvet cover should always be slightly bigger than the duvet for the perfect fit. The duvet does not get bunched up if the cover is larger. Duvet covers are for protecting your duvet and add aesthetic value to your bedroom décor. We will have a look at different duvet cover sizes.

You must be wondering why there are only three sizes in duvet cover whereas the mattress come in at least three more different sizes. The king size will fit California king duvet cover and the queen fits full size duvet cover. Similarly, the twin xl duvet covers are the same size as twin.

How to choose duvet cover fabric?

Duvet cover are at the top of your bedding and add aesthetic value to the overall bedroom appearance. You will find all the fabrics commonly used in beddings for duvet covers too. Choosing the right duvet cover means you enjoy wholesome sleep. We give you a list of duvet cover materials.

Silk is the most expensive fabric in the textile industry. If you prefer to stay warm during the night silk duvet cover are the best as they trap heat. You have to take care while washing silk bedding as it requires delicate care.

Linen has remarkable strength and durability; you’d expect the duvet covers to last for years. The fabric is cool and absorbs moisture efficiently.

Tencel material is often mixed with another fiber to enhance the soft feel and comfort. It has good anti-microbial properties for hygiene and protection against dust mites.

Bamboo duvet covers are considered an alternative for cotton, but they are not sustainable and skin-friendly. You will feel the softness and breathability similar to cotton.

Wool has natural tendency to keep you warm, the people living in cold region will love the coziness of woolen duvet covers. But wool might be a bit harsh on the skin and not as soft as other fabrics. During summers, you will wake up soaked in sweat with wool duvet covers.

Microfiber is a synthetic material blended with another fabric for the best result. They are bad for hot sleepers. Even after being a popular choice, microfiber isn’t good for people with allergies.

Cotton is the most preferred material used in the textile industry and the duvet covers made from it are soft, durable, lightweight, and breathable. They are suitable for almost all-weather conditions and safe for the skin.

The size and fabric of the duvet cover should be your personal preference. Choosing the size is easy but you have to work around finding the best fabric that suits your weather, comfort, and affordability. You have to keep in mind while buying duvet cover is to ensure it has corner ties to prevent the duvet from bunching up inside the cover.

Remember the duvet cover protects your duvet from getting dirt which means you are saved from the trouble of washing and laundry. You can also try out different colors for your bedroom as the duvet cover comes with set of two matching pillowcases. We are done with summer now and you would want to stock your beddings before the gripping cold of winter. Check out the fall inspired duvet covers that will spice up your bedroom here.

Creating an account has many benefits: check out faster, keep more than one address, track orders and more.